The Intricacies of Swear Words in History

The life of an explorer is governed by words, writes Michael Ondaatje: ‘By rumors and legends. Chartered things. Shards written down. The tact of words. In the desert to repeat something would be to fling more water into the earth. Here nuance took you a hundred miles.’

It is easy to see as you flit from language to language and culture to culture, the myriad of expressions and idioms could take a lifetime to truly explore. One of the most compelling and varied areas is the nuance of cursing.

Most cultures have been swearing persistently for a very long time. For cursing is the soul of a language exciting itself in hollow places – loud and coarse. Dr. J.N. Adams of Manchester University studied swearing by Romans and found out that they had 800 ‘dirty’ words. Depending on how you define the term, we have around twenty.

Refracted through the history of language, swearing seems to have some quasi-universal qualities. In almost all cultures, swearing involves one or more of the following: filth, the forbidden (particularly incest), and the sacred, and usually all three. Ophelia could pun: ‘Young men will do’t, if they come to’t; By cock they are to blame.’ Cock was for a long time not only a slang term for penis but also a euphemism for God.

Over the course of history, we know that the meaning of swear words changed dramatically and many have been forgotten. In the eighteenth century there is evidence that suggests the word “shit” was considered acceptable and “prick” was a standard word. Piss was thought to be unexceptionable in the thirteenth century and remained in common usage for a few hundred years. Conversely, words that sound innocuous today, like zooterkins, puppy and cad occupied the center stage in the world of imaginative contempt and scurrility.

A remarkable example of this is “bloody” in England, which to most Britons is at least as objectionable a word as word shit and yet it is meaningless. It’s now often hard to tell when they meant it as a curse and when they meant it to be taken literally, as when in Richard III Richmond says, ‘The bloody dogs is dead.’

In Toni Morrison’s Nobel Lecture she says, “The vitality of language lies in its ability to limn the actual, imagined and possible lives of its speakers, readers, writers. Although its poise is sometimes in displacing experience it is not a substitute for it. It arcs toward the place where meaning may lie.”

When the French Revolution reached its zenith, Christopher Hibbert writes that Jacques René Hebért used coarse and abusive language in his journal Le Père Duchesne, calling the Queen, “the Austrian bitch”, her sister-in-law, “Big-arse Babet” and the King, “Monsieur Veto, the drunken drip” that secured him broad readership among the oppressed people.

Marc Guillaume Vadier, a vindictive lawyer and ardent Jocobin, bragged about arresting that “fat stuffed turbot”, Danton. Hearing of Vadier’s threat, Danton sweared that if his own life would be threatened, he would become “more cruel than any cannibal”; he would eat Vadier’s brains and “shit in his skull”. Bordel de merde, vraiment!

Swearing like any word-work or language training course can be trickier than violins. As Toni Morrison said in her lecture, “Be it grand or slender, burrowing, blasting, or refusing to sanctify; whether it laughs out loud or is a cry without an alphabet, the choice word, the chosen silence, unmolested language surges toward knowledge, not its destruction.” 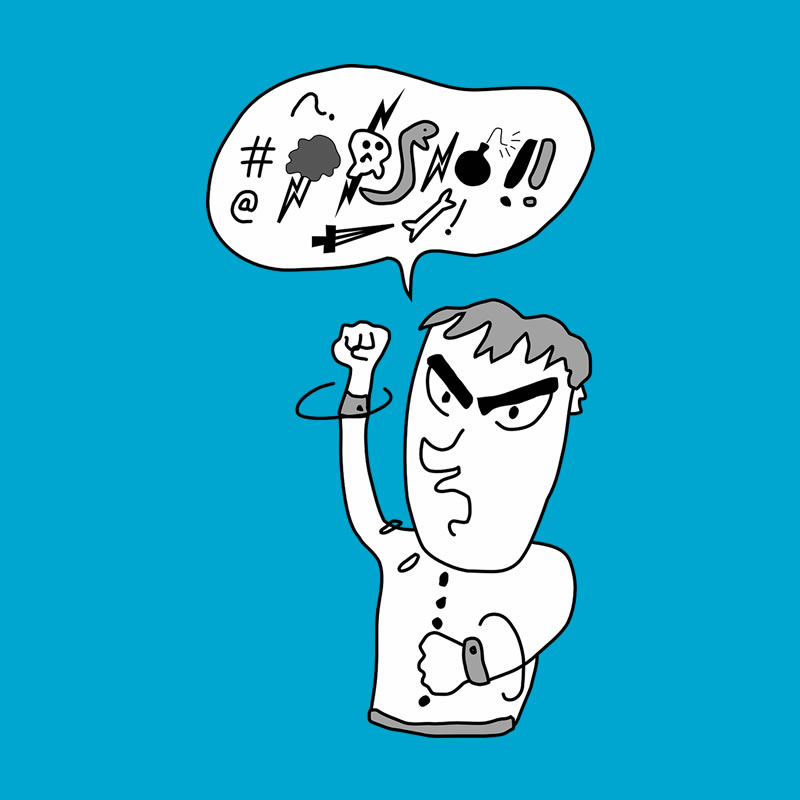